Richard with Edgar Mitchell, the sixth man to walk on the moon

Richard was nine years old when Neil and Buzz walked on the Moon and remembers watching it in the early hours on a small black and white TV with his three elder sisters. His fascination with the Apollo Moon Landings has never left him and his enthusiasm continues to grow.

Richard is able to provide a Talk on the Apollo Missions and tailor make it for the chosen audience. One of his most interesting Talks is ‘From the Earth to the Moon – The Mechanics of Apollo’ and by using film & video, together with models and ‘props’, Richard takes you on a journey from the Earth to the Moon and returns you safely back again. You will be left with a basic understanding of how the Space Crafts worked and have an insight into some of the challenges that the Americans had to overcome to get men on the Moon. 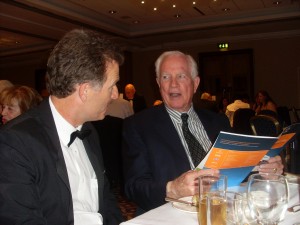 Richard with Dave Scott, the Commander of Apollo 15, the seventh man to walk on the moon

Each talk is designed to Educate, Entertain and Inspire. Feel free to contact Richard by email or by phone to discuss your requirements. He very much looks forward to speaking to you.

On a purely personal note; Richard met and fell in love with his wife Caroline many Moons ago. They have four amazing children; Sarah, Charles, Emily and James. Richard lives near Bristol and is a salesman by day.